One of my greatest desires is to help students make sense of unfamiliar text and vocabulary. So, it only makes sense to couple augmented and virtual reality resources with an upcoming unit on informational text to serve as a hook on which to hang new information.  Just recently, our ELA Coordinator found an article on Gentle Giants from Readworks and that was all I needed to have a jumping off point for AR/VR integration.  I pulled Discovery's 360 video on the whale shark, the featured figure in the article, and paired the video with our VR Viewmasters to create an immersive experience.  (Note: The 360 feature only works when viewed through the YouTube app, but a VR viewer is not necessary to see the 360 effects.)  I ran the article through LessonWriter to get vocabulary and literacy activities to use in the writing activities and created three stickers for a small group station (two of the whale shark and one of a hammerhead).  I augmented the stickers using Giphy and Aurasma and used them to help students better understand the passage.

The augmented pictures are amazingly cool! First time viewers always look under the iPad to try to determine what is happening:) However, the best part for me was previewing the images with a second grader.  I asked if he knew what a hammerhead shark was...of course, he knew. "What about a whale shark?"  Well, yes to that too!  Realizing that I was dealing with an advanced friend, I asked him if he knew what zooplankton was (a word which appeared in the Readworks article). Finally, I had stumped him! 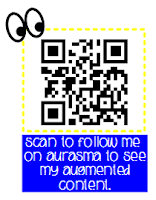 We scanned the sticker showing a whale shark eating.  (You can view the augmented content by creating an Aurasma account and scanning the QR Code pictured on the left.)  When the short video had finished, I asked him if he had any idea what zooplankton were now.  His response, "I think that zooplankton are tiny creatures that whale sharks eat."  Yes! Bingo! You got it!!!  Now, while I cannot swear that the video I attached to the feeding whale shark gif shows zooplakton (sorry,  if they are not), the idea was to translate unfamiliar vocabulary into a pictorial representation that my young friends would understand and remember...it worked!  The complete lesson includes vocabulary, reflection questions and small group activities. For student notebooks, I reduced the size of a QuiverVision coloring sheet of a great white shark to fit 4 on a page and asked the students to research and compare the whale shark with the great white and hammerhead by using a Venn Diagram. 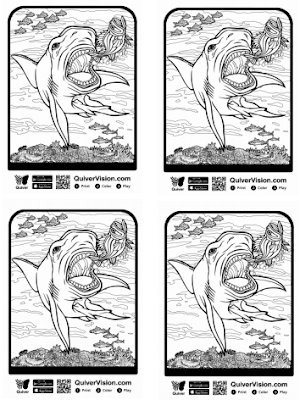 Here is a link to the printables and the complete lesson plan.

ar apps for kids it’s to be seen as one of the major learning while you play concept for kids. Kids AR Alphabets apps help the kids to learn worthy.