I have had so much fun this week catching up on missed blog posts and pins from the Spring.  There are some great ideas that I am definitely planning to incorporate next year!  As I was going back through everything, I seemed to gravitate to assessment.  I found myself up way to late reading about self-assessment, interpreting data, and testing treats.  Some of #MyFavFinds are:

I heard about something like this last year and never quite wrapped my mind around how it worked. I guess I am a bit of a visually learner, because this makes perfect sense now and seems like a fantastic idea for evaluation at the end of class.
What a great visual aid for 'where to pick it up tomorrow'!  Timeouts and Tootsie Rolls has numerous  ideas for exit tickets.  These are providing great inspirations for a few #Made4Math projects:)
Here is a similar idea using only a bulletin board and post-it notes.  I appreciate the simplicity!
Sarah at Everybody's A Genius literally made exit tickets and laminated the slips to make them reusable.  She created enough so that everyone would have one and she would not need to erase them between classes.  I like the variety of ideas.  It keeps class fresh.
Finally, Tonya shared an awesome idea for instant data analysis!  Her idea makes it easy to gather feedback and analyze both formal and informal assessments.  In her blog post, she describes handing each student a strip of paper containing numbers representing a corresponding test question.  She has the students color the numbers of the problems they missed.  When she glues the strips onto a manila folder, she is quickly able to identify opportunities for reteaching.  Genius!
Posted by Cindy at 6:30 AM 0 comments

Pin It Email ThisBlogThis!Share to TwitterShare to FacebookShare to Pinterest
Labels: #MyFavFriday, Assessment

I am so excited to get back in the swing of #Made4Math Mondays.  This makes 2 in a row for me!!!  It has been too long and ideas have been rattling around in my head for months.  This project is a spin off of Splat!, in which students use flyswatters to swat the correct answer to a factoring question.  In Alien Invaders, students will use laser pointers or flashlights to select correct answers!  Hopefully, the kids won't notice the similarities since one will be played in the Fall and the other in the Spring.  For Alien Invaders, I started out by creating my own creatures, so that I was not infringing on others' artwork (I'm never sure about appropriate use of  published stuff). 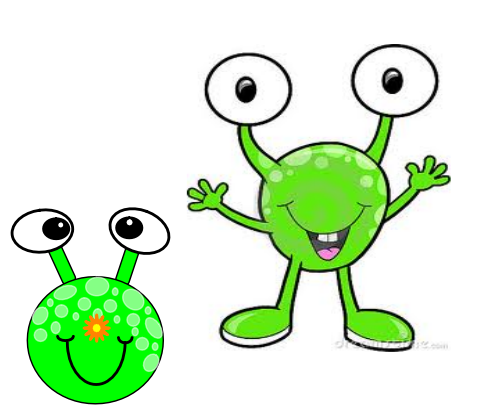 Being a middle aged woman, somewhat removed from little boys and aliens, 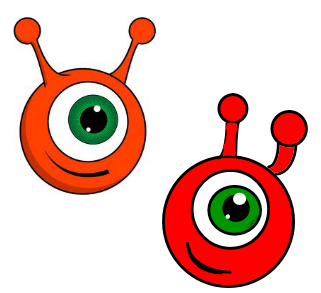 I looked to the internet for some inspiration. 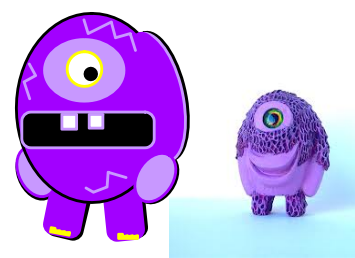 The nicely shaded ones were created by true artists. 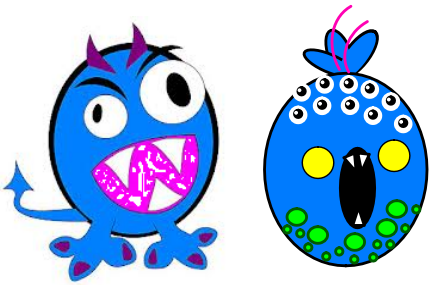 Mine were done using Promethean's ActivInspire and a bunch of shapes (feel free to improve them and then share with me:).  For this game, I will tape the aliens sporting answers to the ceiling, arm the students with death ray beams (laser pens or flashlights), prepare a stack of questions, flip the lights off and let the fun begin.
Alien Invaders


I have created this version for trigonometry to reinforce the (x, y) coordinates of significant angles on the unit circle.  I have tutored kids from all over and noticed very few students have a good handle on being able to rattle off the sin 150 degrees or the cos 315 degrees (not that this is an important life skill, but it does prove particularly useful in trig class).  A few years ago,  I found the "Trig Hand", which I use instead of having students just memorize the entire circle.  It reinforces the importance of quadrants in determining the sign of trig ratios and reference angles.  I made Alien Invaders to practice evaluating the trigonometric ratio (without a calculator) using the trig hand, but this could be adapted to fit any question and answer scenario. 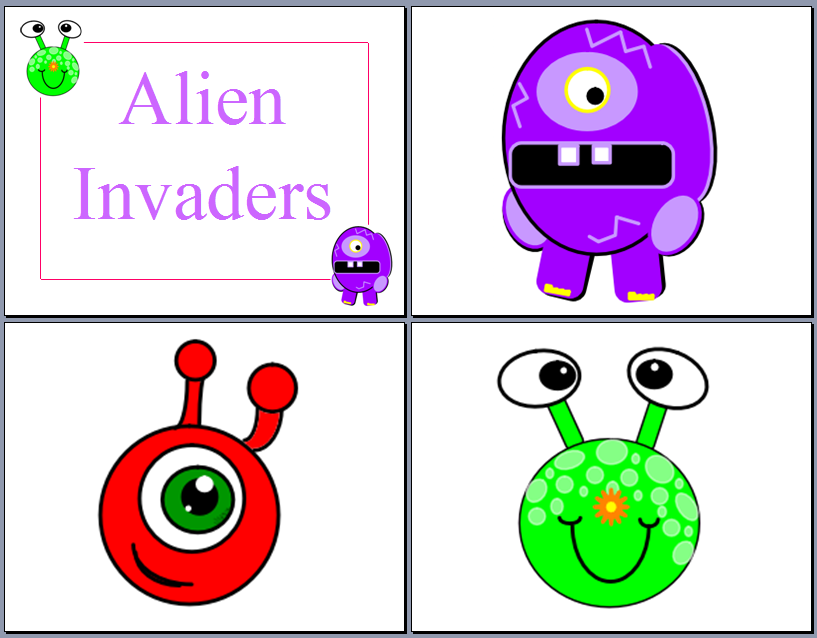 The students will be divided into four teams.  Two teams will compete against each other at one end of the room, while the other two teams are battling it out at the opposite end (so that everyone gets a turn quickly). With the lights off, I will call out a question like the sin 225 and students will use the laser pointer (flashlight) to identify the correct answer before their opponent. 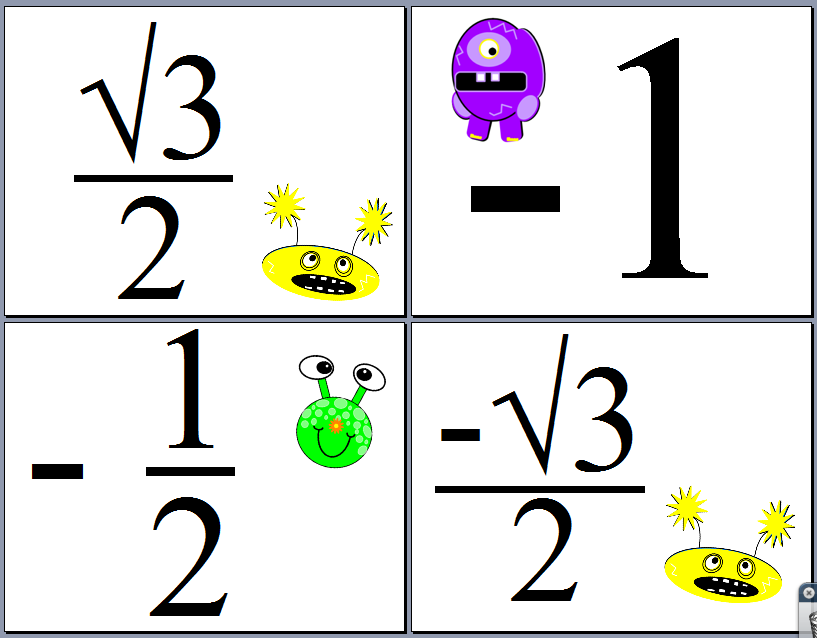 Like Splat!, I expect this to get ReALly noisy, ReALly quickly, but if they are yelling about math, I will be okay with that...and hopefully, so will the teachers in neighboring rooms.
Posted by Cindy at 8:30 AM 1 comments

Yesterday was the last official day for teachers for a while.  It is always a funny thing...a school without teachers and students...essentially an empty building visited only occasionally by parents returning lost books, a student in need of assistance for the upcoming ACT, and athletes getting a sip of water after practice.  I'll be there another month breaking only to attend a conference or two during June, planning for next year already, and getting new spaces prepared for our 2013-14 ECA family.

Thinking as a teacher, I have been reflecting on the year, identifying what worked, what didn't, and what needs tweaking.  At our school much of this week's talk revolved around the Common Core.  We are scouring Pinterest and blogs for insight on a smooth transition to the new curriculum. Our state is in the process of assembling a Teacher Toolbox.    It is still a work in progress as of now, but should be filling up with scope and sequences, unit plans, and sample lessons.by mid-June.  I saw a CCSS Flipbook the other day from Algebrainiac that I am eager to explore. The flipbook helps organize the common core standards by grade and by subject in high school.  It looks like it will be very helpful in keeping it all straight.


I am so looking forward to summer, because can't wait to get back to my regular blog postings of #Made4Math and #MyFavFriday!  Last night around 11PM, I seriously considering going out to the car to retrieve my computer so that I could blog my 'My Favorite Friday Finds", because I was so excited about Runde's Room 4 corner strategy.  I thought this collaborative activity was fantastic! 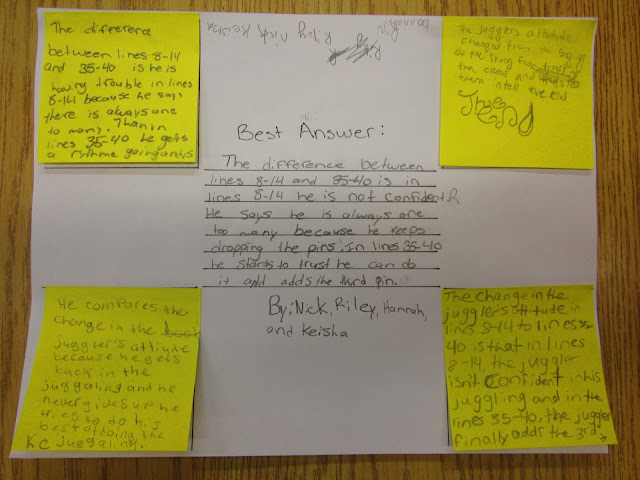 If my friends are reading this, they are probably shaking their heads right now, but blogging, creating, working on my home is refreshing for me.  I am encouraged and refueled by the sharing of ideas via conferences, twitter feeds, and others blogs.  So, thank you to all of you who blog, pin, and tweet - you help me grow to be the teacher I want to be.  Wishing you a HaPpY SUmmEr!!!!!!
Posted by Cindy at 1:34 PM 0 comments

Disclaimer: This post was actually drafted in February, but due to my pesky need to have everything 'just right', I didn't publish it because I couldn't find pics of the activity.  As the year draws to a close, I wanted to share it, because it was really fun and it is something I will continue this summer as I create Math Questions of the Month for the 2013-2014 school year.

I am so excited to share this week's #Made4Math idea, because it motivated tons of random kids to do math problems for something other than a grade!!!  In fact, students were literally running down the hallways (sorry, Principal Dean:) to check their answers...okay, I promised the "first one with the correct answer" a candy bar, but all of the others were curious just to see if they worked the problems right.  Yay, score one for the Math Department!!!

So, let me back up...every February our school celebrates Black History Month through a program filled with songs and praise dances. This year, the event organizers asked departments to furnish a Fact of the Day honoring an African-American who made significant contributions in each content area.  The facts were read during the morning announcements. Each department was responsible for only one day of the week and since we were out one week for Winter Break, each department had to furnish only 3 facts for the month.  The math department's day was Thursday. 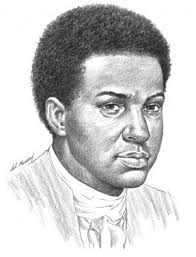 As the first Thursday rolled around, I knew I wanted our's to be different, interactive, and contain something about math.  I researched African-American mathematicians and stumbled upon Benjamin Banneker, who, besides studying engineering and astronomy, wrote math riddles in his personal journals.  Very cool and the inspiration for our 'math facts' announcements.  I wrote the announcements introducing Mr. Banneker and then included a math riddle at the end.  Here are a couple that we shared:
Announcement 1:  Benjamin Banneker, American scientist, author and mathematician, was a self taught inventor and engineer. After studying a neighbor's pocket watch, Benjamin Banneker constructed a working wooden clock that kept accurate time for 50 years.  Assuming there a 365 days in a year, how many minutes did Mr. Banneker's clock tick? Be the first to A-5 with the correct answer and win!

Announcement 2: Last week, we introduced Benjamin Banneker, a son of a former slave, who was born on a farm near Baltimore. From books loaned to him by a neighbor, Banneker taught himself surveying, astronomy, and mathematics. Later, he published several almanacs of his own containing astronomical observations.  He also kept a journal.  In his diaries, Banneker wrote mathematical puzzles, one of which we are featuring today.  So here is the math question of the week:  A farmer had $100 to spend on 100 animals.  If bulls cost $5, cows cost $1, and sheep cost a nickel, how many of each type of animal was the farmer able to purchase?  Be the first to A-5 with the correct answer and win!

I created table tents featuring the math riddles for each of the cafeteria tables in case someone missed the details during the morning announcement (I figured the students might as well do math while eating their fish sticks).  Finally, I created a candy bar wrapper which was wrapped around a giant candy bar and given as a prize. 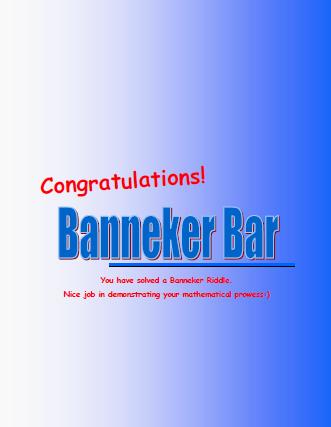 Next year, Math Question of the Month...something to work on this summer:)

The first person with the correct answer won the Banneker Bar and everyone else received coupons for a free hamburger at the local fast food restaurant near the school.  Truly, kids ran to my classroom to check-in with their answers.  If the answers were incorrect, it provided me with an opportunity to ask them to explain their mathematical thinking and help redirect them to the correct answer.  I loved seeing students that are not in my class this year and watching them get excited about solving problems.  So why should math facts make the announcements only in February?  Why not throw in a challenge question randomly through out the school year?  I promise, it's fun!!!
Posted by Cindy at 10:45 PM 0 comments